… though this is related, trust me. One of the unsung heroes of snowshoeing in the northeast is Laura Clark. Along with series founder Ed Alibozek, Laura has done an incredible amount of work promoting snowshoeing in this part of the country, through organizing races (the Saratoga Winterfest race in early February is in its 18th year – that’s older than most of the students I teach!), writing articles and race reports for a variety of outlets, helping with races, and competing in an impressive number of events both during snowshoe season and the rest of the year. You wouldn’t be reading this right now if it wasn’t for Laura (she’s the one who asked me if I’d be willing to help out.)

But this isn’t about Laura, it’s about her late husband Jeff, who passed away back in 2014. Jeff was one of us too – helping Laura organize the Saratoga races (and making sure things went smoothly while she was out on the course running the race) and in many cases hiking races while she competed in them (which sometimes meant he left before the runners did and had the unique joy of breaking the trail until the runners caught up and passed him.) Jeff was always willing to help out, always supportive, always had a story to tell, and always had a smile and positive comment for everyone. 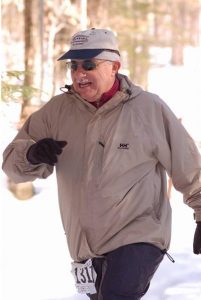 Yesterday Jeff was honored by Saratoga County as part of their “Honoring Our Deceased Veterans” program, in recognition of his service during the Vietnam war. During the ceremony a flag that was flown over the Nation’s capitol in his honor was raised and will fly over the Saratoga County Offices for the next thirty days. More information can be found in an article about the ceremony and Jeff’s military service in the Saratogian.

Race info has been updated for the Western MA Snowshoe Scramble (1/27), Saratoga WInterfest (2/4), and Camp Saratoga (2/10). Online preregistration is available for all three – I hope to have mail-in registration forms for the two Saratoga races soon.

Also, Brave the Blizzard (2/24) has lots of preliminary information at the official race site and online registration is open there as well.

As mentioned by RD Tim Van Orden before today’s races, prices for the National Championship Races on March 10 & 11 at Prospect Mountain Nordic in Woodford VT will be increasing at midnight Monday January 15. Register now if you want to get the best prices.

First the reminder – registration closes tonight for tomorrow’s 5k & 10k races; there is NO DAY OF REGISTRATION.

Next – some updated shuttle and start info from RD Jeremy Drowne. The shuttle will continue running after 9:30 AM so folks running the 10k can stay warm at the Community Center a little longer. The shuttle ride is 15-20 min if the roads are good. Once the shuttle arrives at the parking lot, it’s about 4/10 mi to the start area, so leave plenty of time to take the shuttle and walk/jog to the start. The Land Trust clubhouse will be open and heated for people to wait in after their races and to leave dry clothes for afterwards. Please try to be on time so the races can start on time.

For all the latest, keep an eye the race FB page.