Sunday’s Northeast Snowshoe Championship at Prospect Nordic in Woodford, VT is the final event of our 2016-17 series. While the recent warm, wet weather has made a few course changes necessary, RD Tim Van Orden is confident we’ll have a top-notch event to wrap things up.

The course will be a rolling 5k loop with good snow coverage; the 10k runners will run the loop twice. Ice cleats or standard cleats are recommended – the snow is unlikely to be deep enough to use deep cleats comfortably.

And for those of you who have been upset about the recent warm weather seeming to signal an early end to winter – Sunday’s forecast currently calls for sunshine and highs in the mid-teens, with windchills down around zero. Winter hasn’t left yet!

And finally – daylight savings time starts early Sunday AM, don’t forget to set your clocks ahead before you go to bed Saturday night. It would be a shame to show up at the final race of the series after the race has started!

We are the world, we are the children
We are the ones who make a better day
— Michael Jackson

Like many international events, the 2017 World Snowshoe Federation Championships in Saranac Lake, New York adopted a theme song, one meant to inspire athletes and volunteers alike.  But instead of the typical Rocky look alikes, the chosen song, Michael Jackson’s We are the World, focuses on the heady sense of community which should be the ultimate goal of such experiences.

While other past and future venues may boast major cities or giant ski areas, Saranac Lake was the perfect showcase for what is best about small town America.  The Athletes’ Parade through a Mom & Pop Main Street would not have rivaled the Rose Bowl Parade, but it was an honest snapshot of a typical American town, one the foreign participants will always remember.  Opening ceremonies in City Hall featured not name-brand performers but elementary and high school singers and musicians displaying the talent and poise that would be a credit any professional ensemble.

The warmest feel-good moment was the welcome for the two Indian athletes, Abid Khan and Tanveer Hussain, who were denied visas despite their paperwork being in order.  For you or me, it would have been an easy fix to travel to New York City to rectify any passport problems, but for them it involved yet another lengthy train journey, days off from work and thousands of dollars they did not have.  Thanks to a go-fund-me plea, a letter writing campaign to local representatives and the generosity of Saranac Lakers who opened their homes to the athletes, a nationally embarrassing situation was smoothed over, restoring our faith in our ability to work through a difficult governmental situation.  It was a win-win outcome for everyone.

Because of the melting snow, the 10K Championship was shortened to 8K with the revised route two repeat 4K loops.  Even as late as an hour before the race, families from 5 year-olds on up were diligently sledding snow onto the course.  Throughout the weekend, it seemed as if the entire town was volunteering.  In fact, one finish line staffer, having completed her duties, drove runners back to town in her van, with no qualms about melting snow or sticky mud trashing the interior.

The venue at Worlds was so much more than our typical draw-a-line in the snow local events.  We were no longer just runners, but athletes.  We were interviewed.  We were here with 296 other snowshoers, some of whom were National and World Class athletes with resumes and sponsors.  As the female contingent well knows, visiting the bathroom multiple times before the race is more than just a necessary experience, but a social occasion.  I discussed clothing options with Brandy Erholtz (8th overall and 2nd Masters female) and we both advised another future age group winner on whether or not she should ingest an entire caffeine gel or go for half.  They were just ordinary folks, until I learned at the Awards Ceremony that they definitely were not!

The excitement at the start was palatable and everyone was whipping out iPhones to capture the moment.  Fellow snowshoer Peter Canzone was no exception and handed his to a petite, dark-haired girl to take our picture.  I felt like yanking the phone out of Peter’s hand as she was obviously focusing on her upcoming Junior Championship.  She stared at us blankly and then grabbed the camera.  I thought it was just to get rid of us quickly, but I later learned she was one of the Italian winners and didn’t understand our language.  Here we were in an international event, assuming that everyone knew English!  Obviously, we need to get out more.

While the snow/ice combo held up pretty well for the first loop, my initial enjoyment hopscotching from ice mogul to ice mogul at the top of the loop turned serious by the second time around as I gave up and plodded through mud puddles worthy of any springtime trail race.  Some folks took advantage of the warm weather to strip down to shorts and tank top and finished looking more like a Tough Mudder participant.  I learned that spring melt mud was indeed colder that regular mud and was glad I had stuck with tights and long sleeves.

The celebratory banquet was a wonderful validation of all our hard work and showcased the contributions of athletes and volunteers alike.  Many Dion Snowshoe athletes won awards and since our bright orange Dion vests and jackets were covered in mud, we all took turns playing musical chairs with Bob and Denise’s extra jackets, sometimes just making the exchange before it was time for the next person to climb the podium. A nice twist on the typical relay race!

Naturally, by the time the party wound down, we emerged to thickly falling wet snow and a slip ‘n slide parade of cars skittering up the hill.  While mistimed and misplaced, I was grateful that the athletes from all across the country and all over the world could awaken the next morning to a typical Adirondack Winter Wonderland.  Hopefully, they will be back!

As for me, I was thrilled at having finally turned 70 ahead of the strong 60 year-old crowd and being eligible for a new golden category.  I am still enjoying my brief moment of fame, with Facebook posts—even one by our library director—and congratulations from fellow runners and library patrons.  From fellow librarian and best friend Jen Ferriss: “If it was not for Laura, I would have never even been at the race.  She is an inspiration for all ages.”  Embarrassingly flattering, but I’ll take it.  This is a once-in-a-lifetime opportunity that I am so grateful to have had.

Next year in Spain! 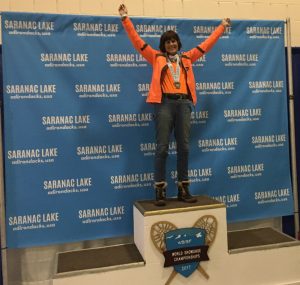 The Thundertrek snowshoe race (and both the downhill and nordic ski races) scheduled for this weekend (Sunday 3/5) is cancelled due to lack of snow.

The town of Adams will still have their winter festival on Saturday – details can be found here.

Stay tuned for updates regarding our final series race of the 2017-17 season, the Northeast Snowshoe Championships at Prospect Nordic in Woodford, VT.

We had lots of our regulars head out to Saranac Lake this past weekend for the World Snowshoe Championships. After weeks of race organizers posting updates regarding all the snow they had – Mother Nature had the last laugh and spent a week melting it all with record warm temperatures and rain. But they would not be beaten, and volunteers spent days shoveling snow trucked in to build a 4k course.

There are photos, videos, articles, and all sorts of coverage out there, and as soon as I get a chance I’ll compile a bunch of it and post it here. But in the meantime, congratulations to everyone who ran this weekend. Regardless of whether or not you won an award, you ran in the first World Championship to be held in the USA – no one else will ever be able to say that.