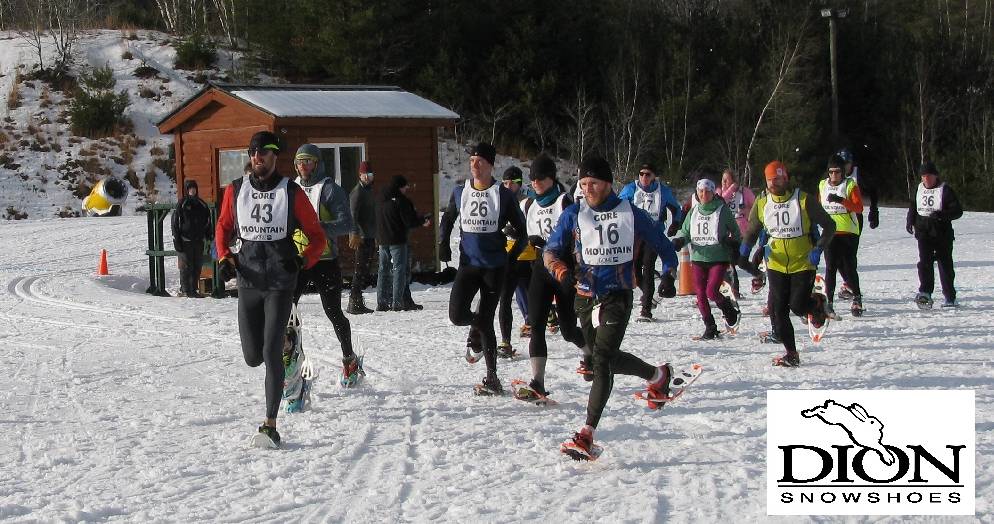 Only one series race this weekend, the Stone Bridge Caveman races at Natural Stone Bridge & Caves Park in Pottersville NY – though past participants will attest that doesn’t mean your in for an easy weekend. Both courses feature plenty of southern Adirondack hills, with the 15k EXTREME course providing a formidable challenge for even the hardiest snowshoer. Course conditions are currently excellent and the forecast is calling for perfect weather Saturday morning. More information, including online registration for the 6k & 15k, can be found here.

Near perfect conditions greeted the runners at the 20th Saratoga Winterfest 5k+ on Sunday 2/3 – cold but not frigid temperatures and a nice layer of soft powder over hardpack (or ice, in the case of the start around the perimeter of the quad.) 64 runners toed the line, with Tim Van Orden and Katya Harte taking first place for men and women. Full results can be found here and photos of all the runners can be found on our FB page.

Saratoga Winterfest is the oldest race currently in our series (along with Camp Saratoga, Brave the Blizzard, and Hoot Toot & Whistle) – the longevity of this race can be directly attributed to the efforts of RD Laura Clark and the Saratoga Stryders, who can always be counted on to stage a first-class event. Today’s course required some modification from the usual route to follow decent snow cover but was so well marked that someone would have had to stop paying attention for quite a bit of time to actually go off course, between all the ribbons, signs, flags, and volunteers out on the course.

RD Eliza Hamm has let us know that the trails at Viking Nordic held up surprisingly well through this past week’s wet, warm weather and both the 10k & half marathon scheduled for tomorrow are a GO! Full info can be found here.

VOLUNTEERS ARE NEEDED TO HELP WITH TOMORROW’S RACES – if you’d like to assist, please contact Eliza either through the Nor’East Trail Runs site or their FB group. Vollies receive credit toward a future race registration, a hat, access to the Nordic center trails for the rest of the day, and great appreciation from the race organizers.

After a week of somewhat challenging weather, the 2019 Mt Tom Snowshoe Scramble was surprisingly run as a snowshoe race, thanks to a re-routing of the course that lengthened it slightly, introduced a few new hills, and moved the major climb to later in the loop. Runners had the option of one or two loops. The snow had held up surprisingly well, with decent coverage and a mixed of frozen hard-pack and icy powder.

Runners were given the option of using either snowshoes or trail shoes with traction assistance, so the race has been scored as two separate races based on choice of footwear. Stephen Kerr and Kathy Furlani were the 1st finishes of the 3.4mi snowshoe race, with only Jason Kudron & Tom Tifft completing the 2nd loop on snowshoes. Kelsey Allen finished first for both loops of the trail race, seconded by Joseph Bernstein on the 1st loop and Wayne Ball on the 2nd.

Thanks to Amy Rusiecki and her team of volunteers for continuing the Mt Tom tradition despite multiple challenges – currently this is our only series race that is actually held in MA! Full results can be found here, and photos of most of the runners on the 1st loop are here.